Posted on January 9, 2010 by Antonio Vantaggiato 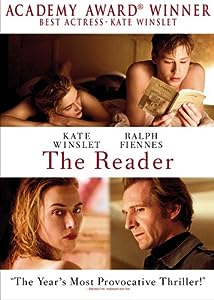 Cover of The Reader

It’s the beginning of the new year, thus time to discuss what was best in 2009 in a number of categories. So, I hereby unilaterally proclaim the 2009 Skate best film award. The category is only one: the films I actually went to the movies for during 2009.

First, the award does NOT go to: Curious case of Benjamin Button. Indeed, beautiful performance by both-divine Cate Blanchett and Tilda Swinton, it is a nice movie… or better, a nice mis-en-scene, a theatrical show of good acting and mannered direction, plus cinematography. That’s all folks, don’t ask for no more, there ain’t, Scott Fitzgerald notwithstanding.

The award may go, definitely to Inglourious Basterds, latest provocateur-Tarantino’s tour de force, with Brad Pitt as the Basterds’ boss… The opening scene is epic and extraordinaire. The scene when Shosanna gets killed is a masterpiece in direction, music and irony. Tarantino’s movie making is all about cinema, and here one finds everything from many genres. German war hero/sadist Colonel Hans Landa (actor Christoph Waltz) is unique in his subtle ironic kindness and elegance; actress Mélanie Laurent is also quite charmant.

Let’s see if the award will ultimately go to IB. Next, please.

The Reader (Stephen Daldry) with Kate Winslet. Ralph Fiennes plays a very important but minor part, in my opinion. The Reader is a masterpiece and should compete with UB one-to-one. Director Daldry made an exceptional work; it’s great cinema, readable under many lenses: power, for instance. The woman’s power over the kid and the Nazi power over the woman. Both unaware of their role, both negating the bigger powers hanging over their head all the time. The woman, always the best denier (“never underestimate the power of denial”, said the main character of American Beauty), because alienated by those powers (yes, class differences, etc.), does a crime because she must always do a good job. Nice metaphor, eh? A beautiful movie, one which still resonates with me. The Reader reaches poetic status.

Another big shot would perhaps be Revolutionary Road (Sam Mendes) with Leonardo di Caprio and again, Kate Winslet. It’s a very good movie, and I heard people saying it is a feminist movie. Indeed it may be; sure it is a political movie. However, Kate is far superior to Leo’s natural plasticity and in my mind, the movie never reaches poetic status; however, it does resonate and it is still with me!

Woody Allen’s Whatever works, with Larry David + youngster Evan Rachel Wood is a very good Allen movie, but I shall say no more. It simply does not stand up against Match Point or Vicky Cristina Barcelona. With Woody, one has higher expectations. Next.

Burn After Reading (Cohen bros.) with George Clooney and Frances McDormand, plus a very self-ironic Brad Pitt, is a masterpiece of poetic grandeur. An unforgettable film. Irony, elegance, splendid direction and acting.

Almodóvar’s Broken Embraces will likely win the 2009 Skate best film award. As I have tweeted, the movie is a splendid execution of film noire plus melodrama. Perfect in the extraordinary little human story about a classic quadrangle: the movie director who loves his star, a gorgeous Penélope Cruz, the hated husband, an old man, envious and of course jealous, and the husband’s son, a pathetic peeping Tom who videotapes everything in the background (thus shooting a parallel movie). So, we have three movies!! Nice play, Almodovar! A story of passion (Almodóvar’s film company is named “El Deseo”/”Desire”), and certainly of broken desires. It’s the only other movie of the year, together with Tarantino’s Inglourious Basterds which is stylistically 100% cinema and cinema about cinema as well. And it’s one of my favorite movies of the year. More than The Reader?

Last movie seen was Avatar. A beautiful film, it has been dubbed “the Pocahontas of space” and it certainly follows Pocahontas’ plot and characters very closely. A pity for its grand idea: having people incorporate in the body of others could have been played much better. Also, less rhetoric would have benefited the movie, but what can it be done. Only beautiful thing in the movie (sure, the scenery is great, so?) is the blue Na’vi woman from Pandora, so blue, so sexy. Always topless, by the way, and no church protesting. We have really progressed.

And the award goes to…

The Reader, my preferred film for 2009. Congratulations.

Broken Embraces comes shortly behind, just a couple of points less, as well as Basterds. Those two, are **soooo** non-Hollywood it’s really a pleasure to shift for a while one’s viewing pleasure onto different perspectives.