Posted on September 8, 2016 by Antonio Vantaggiato

Silos, Tunnel Vision and the Infantilization of Everything: the disneyBook

I have gone through a few weeks of classes, and I am emphasizing with my students the importance of the open Web vis á vis the closed, institutionalized silos-like environments like Learning Management Systems or Facebook. Or even today’s Web-based newspapers, so full of text but so shy of links. The Web is but a net of documents and the link system among them is the architecture that holds all together.  So, I try and develop in students a feeling for the magic that is (still) the Web. We ought to defend it, and to nurture it, beginning from academia. At the same time I notice a general decay towards infantilization (at least here, in big America): in cinema (essentially, movies for adolescents), literature (novels for adolescents are on the rise, Harry), gaming (of course, you’d say, but gaming is for all ages) and of course, at school. Infantilization is a technique used to reduce all to a minimal common denominator that everybody responds to. Consequently, it’s easier to script a movie when such a heavy track is imposed: just use proven formulas. So, infantilization gets a return on investment which is foolproof. This is how a class in mythology ends up discussing the wedding of Peleus and Thetis as if it were just a get-together of Zeus’s devising. And then I remembered Disney and Disney World. Aren’t them the epitome of all I’ve been talking about?

So this is my theory. 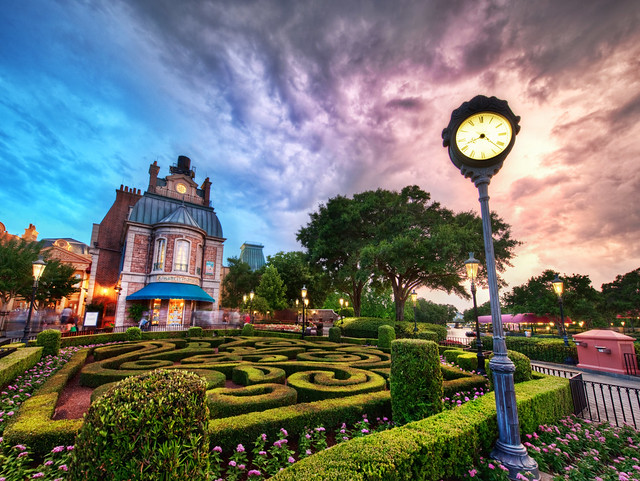 Consider how a typical FB timeline works. You get a series of entries, where each has one or more photos and some text. There may be one (just one) YouTube video. And one (just one) link to a Web page. Now, that may seem like a blog post, but it has not the expressive freedom of blog posts and the logic of the timeline’s display is not a simple stack of entries. Instead, FB’s closed algorithms (of which most people don’t even know the existence) decide what gets displayed and in what order, and what does not.

The teachings of the open Web, on the contrary, are not discussed or used within such a closed-system approach. (NOTE the similarity of the FB’s timeline with some LMS’s content sections.)

In his blog, Dave Winer’s wrote:

Imagine there are parks all around Facebook where people get to do all they want. That’s the web. Inside Facebook is heavily policed, there are severe limits on what you can do, so it’s safe. That’s what they’re going for, and it’s not a bad idea. Both ideas have a place, and there should be entry points between the two. That’s what links are, a border crossing between ControlLand and the democratic space.

The fact that Facebook does not support linking in their posts is really hurting the rest of the web. It’s made people choose between writing exclusively on Facebook or mixing it up between FB and their blog, and other services. If you want to do the latter you have to base your writing outside of Facebook because they do not support linking. [My boldface] –Dave Winer (Facebook and linking is a big deal)

If I publish a photo within FB, it gets shut within a closed silos. All (my) friends can see it, but essentially, I lose its property. If I followed an open ethos, instead, I would publish the photo in Flickr or other open system (even if proprietary) and share the photo’s use with the world with a CreativeCommons license. I would get a double advantage: an open publishing system whereby everybody can get access to my media, and more exposure (and marketing power) for my work.

We tend to not typically understand how FB’s tunnel algorithms work.

For years, the News Feed has been fueled by automated software that tracks each user’s actions to serve them the posts they’re most likely to engage with. That proved successful in helping News Feed generate more revenue for Facebook than any other part of the site.

The feed is being curated because there is simply too much content to show everyone everything. Curated by humans or automated algorithms does not matter.

Facebook says the average user has access to about 1,500 posts per day but only looks at 300. (A user who scrolls endlessly will eventually see every post from their friends and a smattering of posts from Pages they follow.)

In a study, reports Time.com, “62% of people didn’t know that their News Feeds were being filtered. When the algorithm was explained to one subject, she compared the revelation to the moment when Neo discovers the artificiality of The Matrix.”

Curated. The magic word in The Magic Kingdom.