Talking about Learning Spaces with #edu646

Posted on February 23, 2018 by Antonio Vantaggiato

I love my graduate class #edu646 (Design of Learning Environments), which I’m doing with a small number of great students. Yesterday’s class was intriguing since we had one student on a Hangout from NY, while the other two and myself  stayed here in front a big screen.

They all managed to do quite some interesting interviews on the subject at hand, namely: What consideration do architects and educators place on the design of learning spaces (both physical and digital)? So we watched the videos (look at the class website).

First, I liked the way the videos were organized and the interviews done. There is a subtle art in doing interviews to catch the savvy of people/experts and we do not pretend students to manage it nonchalantly from the beginning. But they did a very good job.

Then we summarized the main points made by the interviewees of the evening.

Last we discussed about one particularly interesting concept:

“Space designed to invite people to lower their voice.”

In what ways can we design a space which invites people, for instance, to turn off a device, instead of imposing and order to do so?I’m sure that Jorge (who has the task of resuming the class) will talk about some of those in his post.

Then we made the only mistake. We bid goodbye to Yoselyn in NY thinking the class was over. But it actually wasn’t and we stayed 15 minutes longer thinking about stuff and about plans. Let me write a bit on those plans.

First, we’re doing an informal review of the main point “experts” look at when designing spaces and learning spaces in particular. At the same time we are collecting a number of resources (literature readings, Twitter profiles, blogs) we will be filtering and discussing later.

Secondly, we’ll study the literature (which includes a few canonical readings offered by me) and then look and see what of the above mentiones points are reflected in the readings and for what reasons.

The goal, by the end of the course is to come up with a super list (a manifesto, if you will) of features one should consider when designing a learning space. Of course, we will have to compile that list under the basis of some cognitive/learning theory. In the end, we should have something like this table:

Example: In the Constructivist Framework, if we want to achieve a liberally occurring process of knowledge construction, we must do so and so. 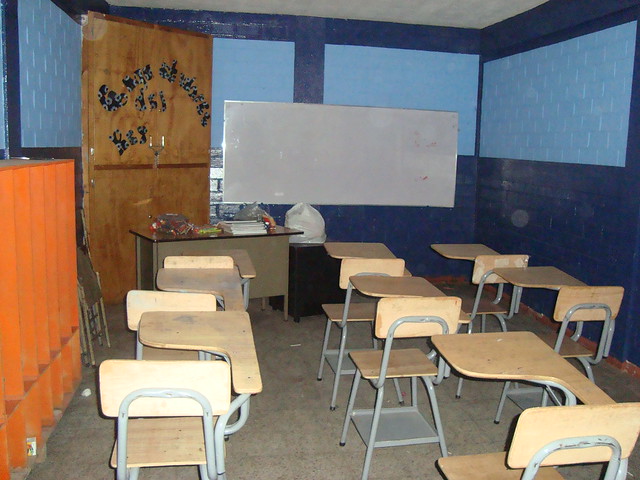 [Image shows a very common classroom arrangement from elementary to graduate school. Under which framework has it been designed? Of course, this–as Audreay Watters would say, is edtech.]

In our case, we’re doing this under the roof of the(sort-of) open & connected framework of this course, which is being used by students, even though we haven’t discussed (yet) the paradigm–but certainly will.

Also, I proposed my students to begin (later) a little research on the similarities (and what theories such similarities respond to) between the following concepts:

A Campus || A shopping Mall

The first two are designed with intentions other than pedagogical, but all produce an enchanted, enclosed garden. What appears so good about enclosed spaces that we end up loving them so much?

The image carries this interesting note:

Inside Inglebrook Community High School, where the students apparently attend class on old sofas. The whole place had a very laid-back vibe that looked like it’d be great for kids who hate regular school, and bad for ministry-generated funding formulas.

Professor, web2.0 enthusiast, and didactic chef.
View all posts by Antonio Vantaggiato →
This entry was posted in education and tagged edu646, Learning. Bookmark the permalink.