Posted on August 30, 2014 by Antonio Vantaggiato

When in Rome this summer I had the opportunity to view an excellent exposition on Pasolini. There, among original artifacts, letters, newspaper articles, books, I encountered the film-maker and poet who had violently died 31 years ago. Having watched almost all his movies, including Salò, and being so much in awe of the man and the films he did it was a very touching experience. The expo was divided in the decades of his life, and ended up with the sad, black-an-white images of the Ostia beach where he was murdered. Ironically, Ostia is pretty close to my mother’s house, where I stayed.

Two or three things stood up form the show. The Millecento car in the foreground of the Uccellacci e Uccellini (The Hawks and the Sparrows) images with Totò; a letter to Godard, another to Allen Ginsberg; the newspaper publishing his expulsion from the Communist Party; The Poem to his mother. Of course, the movies that so powerfully remind me of my adolescence and which I loved: Decameron, The Canterbury Tales, A Thousand and One Nights. 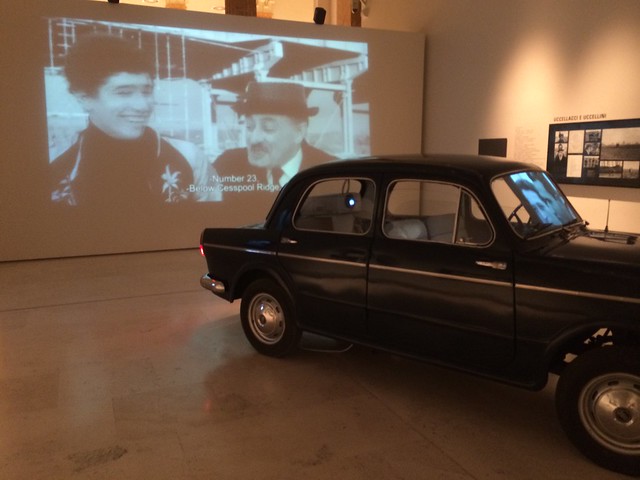 The Allen Ginsberg project quotes a letter Pasolini wrote to Ginsberg, after meeting him in Italy. Fernanda Pivano, greatest Italian translator of the Beat Generation, invited Pasolini, Umberto Eco and other Italian intellectuals to meet Ginsberg. Imagine the meeting!! By the way, I do remember a Poets’ Festival, again on Ostia beach, where I watched Ginsberg reciting one of his poems. Probably the very same year he met Pasolini. Coincidences!

How can one revolt against idiocy? Isn’t this a question so current to be applied so very well to today’s education, politics, and economics?

However, the most moving piece was his Prayer to his mother. Here is an English translation. Down here a verse.

And I don’t want to be alone. I have an infinite
hunger for love, love of bodies without souls.

Here, Pasolini himself reads it.

It’s very fitting then, that director Abel Ferrara asked actor Willem Dafoe to impersonate Pasolini in his last day. The biopic is just being shown at the Venice Film Festival. I long to watch the movie!

Professor, web2.0 enthusiast, and didactic chef.
View all posts by Antonio Vantaggiato →
This entry was posted in films and tagged cinema, poetry, politics. Bookmark the permalink.