Posted on May 8, 2016 by Antonio Vantaggiato

No sooner did I push the publish button for one of my latest post on Facebook sharing, that I fell on this other gem of an article, form Campus Technology, reporting a spectacular series of stupidities.

Article title is: Research: Facebook May Keep Students in MOOCs, from April 28th.

(1) Researchers at Pennsylvania State University have published a study that suggests students may be more likely to stick with massive open online courses (MOOCs) if they use Facebook.
(2) Saijing Zheng, a former doctoral student at Penn State and current research scientist at Microsoft led the research and said she found that open course students were more engaged on Facebook groups and preferred interacting more on the social media site than through the course tools.
(3) That may be good news for MOOC instructors who, according to Zheng, get frustrated because 90 percent of students who enroll in MOOCs leave the course after less than two weeks.
(4) “Social media may provide another communication channel for the students,” Zheng said. “Current MOOC platforms do not include collaborative features for students to work together or good conversation channels between students and between students and teachers.”

I divided the quote into 4 paragraphs according to the following notes and observations.

Thus, two errors put in series correct the original fail? Why don’t these researchers search for real-life tools actually used in work situations? Like Slack, for instance? Why do we have to look for diluted and not-authentic environments to provide students with educational experiences? [Note I’m not saying “to deliver them course content”, by Jove].

I’m really appalled by the topic chosen for this “research”. If research in education goes this way, well, we’ll find Trump soon to tell how it’s going to end. 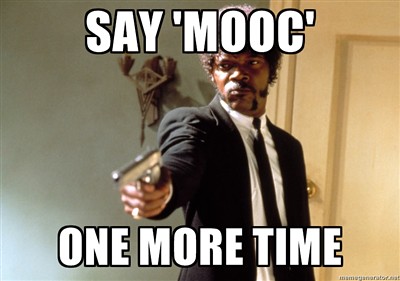