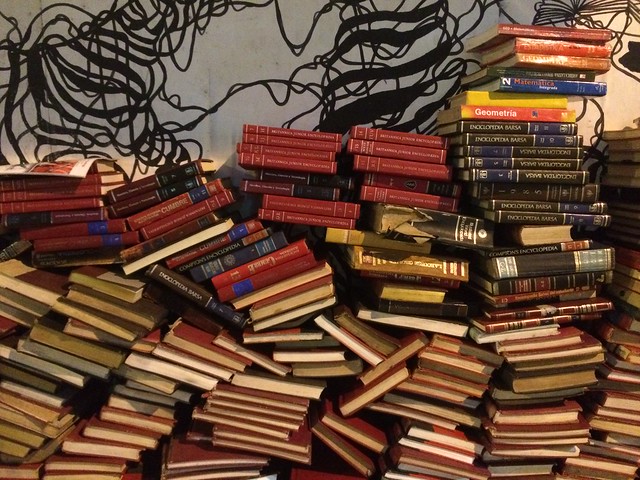 The forgotten encyclopedia lies on the boardwalk, close to the street, a couple of meters off dirt, rain and abandon. Not even school libraries want it.

Of course, it is old, virtually obsolete [pun almost not intended] and impractical. Compare it to Wikipedia. Which by the way did not kill the enclycopedia (á la Britannica) –worst, it was Microsoft’s Encarta that did, the living room computer-living CD-ROM-stored encyclopedia that suddenly, for little money, everybody had. [See: Wikipedia Didn’t Kill Britannica. Windows Did. Tim Carmody, Wired, 3.14.2012].

Not like Britannica or the best encyclopedias. Those were the patrimony of few. My father bought one (an Enciclopedia Treccani, some 40 volumes, each huge and weighty) which stayed like a queen in our big library shelves. Heavy, mighty, except it was rarely used, even when I was at school. He–like many– bought one in installments. At the time, no respectable family in Italy would stay without one. Now, almost forgotten except in libraries, it is fully available online.

The model of a world closed on itself, all encyclopedias managed to do was not turning their nose up and see the future coming. Nor could they foresee the open and collaborative nature of the future of the encyclopedia and imagine Wikipedia, the mythical Web encyclopedia, likely the greatest collective work of humankind. Full of errors, it showed us the even the best paper encyclopedias actually contained mistakes. Which, as Umberto Eco loved to repeat, one could easily correct.

So here they lay, in a simple space called Libros Libres on the street, an initiative aiming to put some books on the paths of people passing by. But encyclopedias, so big and bulky, don’t really belong on those shelves. And in fact they are left on the boardwalk, and there they remain.

Professor, web2.0 enthusiast, and didactic chef.
View all posts by Antonio Vantaggiato →
This entry was posted in open and tagged encyclopedia, open. Bookmark the permalink.