Lenin and Beethoven’s Appassionata, all in Fargo.

There is a scene on Fargo season 3 episode 6 (God of No Mercy) where the wicked character named V.M. Vargas and played by HP’s David Thewlis quotes Lenin’s appreciation of Beethoven’s Piano Sonata Nr. 23. Yes, the Vladimir Ilyich Ulyanov, Lenin.

A little research on Google is all it takes to find the quote. But also, even more intriguing is the chat generated on Reddit around all this. Because the scene seems like a nice quote of the Coen brothers’ The Big Lebowski, where Walter, a character played by John Goodman, shouts

So, the quote from V.I. Lenin as reported on Reddit–I have checked it–is:

I know of nothing better than the Appassionata and could listen to it every day. What astonishing, superhuman music! It always makes me proud, perhaps with a childish naiveté, to think that people can work such miracles! … But I can’t listen to music very often, it affects my nerves. I want to say sweet, silly things, and pat the little heads of people who, living in a filthy hell, can create such beauty. These days, one can’t pat anyone on the head nowadays, they might bite your hand off. Hence, you have to beat people’s little heads, beat mercilessly, although ideally we are against doing any violence to people. Hm — what a devillishly difficult job!

Which had me thinking for a while. A cynical view, certainly! How much does Lenin hate the bourgeois attitudes!

Hence, you have to beat people’s little heads, beat mercilessly, although ideally we are against doing any violence to people. 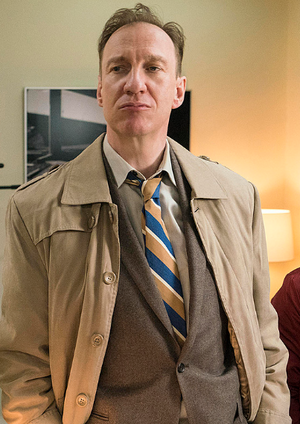 This is proof there is a strong popular culture that forms around pop media, and in this case the Reddit community and this Wikia prove it. Viva Internet!

Anyhow, talking about Fargo 3, let me just add what great, devilish set of actors it displays! From the amazing Ewan McGregor (who plays two parts!) to David Thewlis (VM Varga himself), to the cop played by Carrie Coon–a celebrity after The Leftovers. I enjoyed the show quite much.

Let me end this post with a bit on VI Lenin himself, given this is the 100th anniversary of the October Revolution of Russia. There’s a book I wish to read about the trip he took from Zurich (where he was leading a nice life at the Odeon Café) to Petrograd’s Finlandia station, after crossing Germany–which payed for the trip, Sweden and Finland. BTW, the Odeon Café is the same where people like Einstein, Joyce, Mussolini (when he was a socialist) liked to go. It is still open today.

The book is Lenin on the Train, by Catherine Merridale.

In the featured image, a painting from a Soviet artist, Lenin is accompanied by Stalin, at his back. This is a falsehood, since Stalin was just not there.

Professor, web2.0 enthusiast, and didactic chef.
View all posts by Antonio Vantaggiato →
This entry was posted in media and tagged cinema, media. Bookmark the permalink.