Blue is the color and the movie: A review for the Web and myself.

Rarely, sometimes, I feel compelled to write down a film experience. And curate, together  with the writing, videos and GIFs and links. The movie I watched yesterday–a three-hour-long session– is doing that. Not only, it reminded me deeply of the love for another previous movie I saw a few months ago, Guadagnino’s Call Me By Your Name. That was a powerful, deep and pathos-filled love story that happens between two men, actually an adolescent and a man. The boy’s father, close to the end, says to his son that the experience he lived–then over–must be treasured even though the pain may seem unbearable. I like Guadagnino’s movies (remember my review of his wonderful A Bigger Splash) and this, his last, is sweet and profound.

The movie I’m talking about now is also a love story between two persons of the same sex, two women–or better, a girl and an almost grown-up woman. It reminds you of Call Me By Your Name. Or perhaps, it should be the opposite, since it came out in 2013, before Call Me.

Adèle’s Life (La vie d’Adèle), or in the English title Blue is the Warmest Color, won the Palme d’Or at Cannes and is the product of director Abdellatif Kechiche. I’m reading he spent one year training one main character, actress Léa Seydoux for her (very difficult) role.

I surprised myself smiling during the seance. I enjoyed every one of the 270 minutes of a long love story and story of life. I hadn’t watched the movie before perhaps because I was a little biased with the many, long and realistic lovemaking scenes. I was very surprised to see beautiful camera work and very generous, gorgeous acting. Not one minute over the lines.

Adele the girl is played by Adèle Exarchopoulos (left), with a child face and a grown-up body (the rites of passage), used by her lover as model. Emma, the young woman, the art student, is the blue-haired one. Her eyes and her smile are just beyond words. She is played by the exceptional Léa Seydoux. 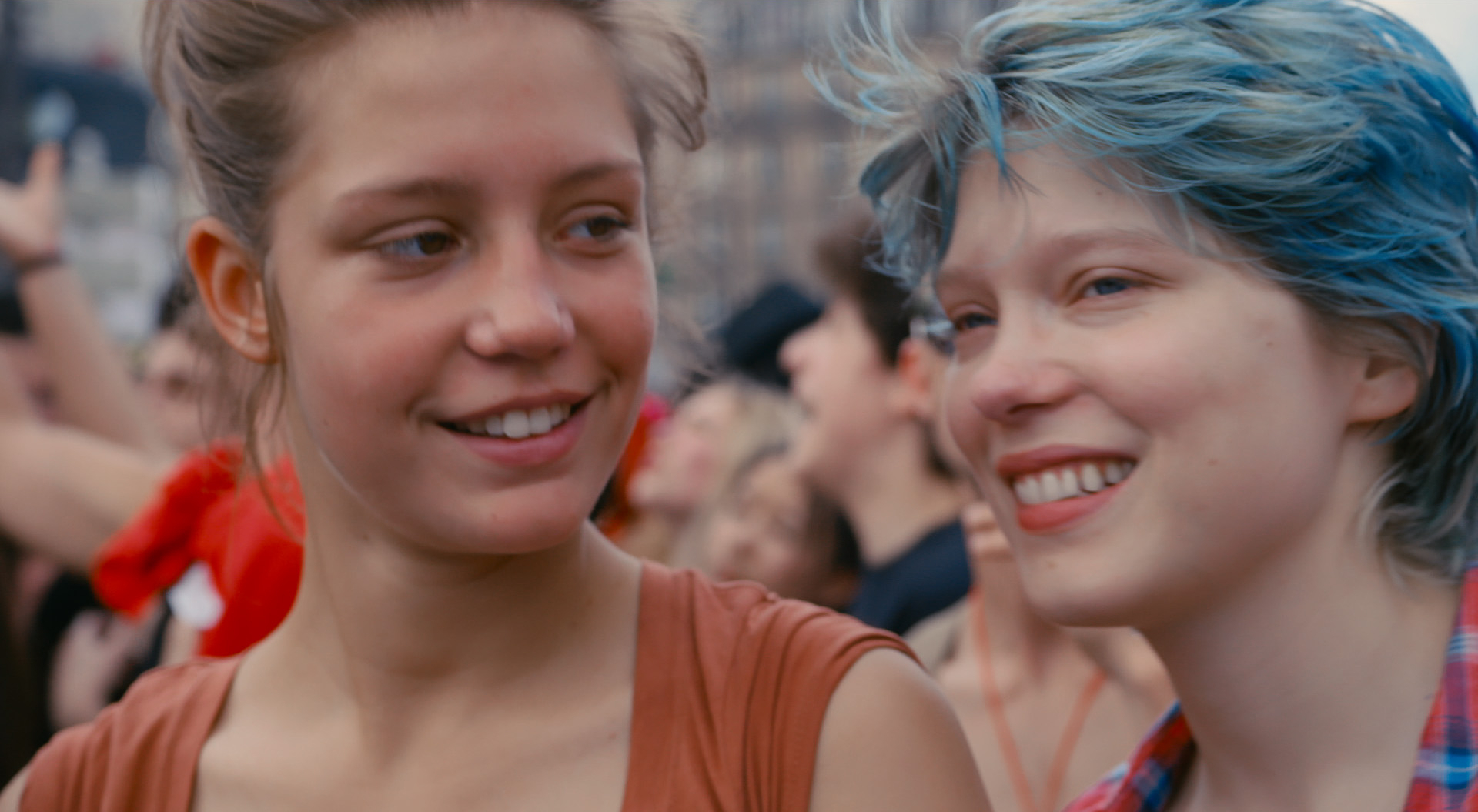 What is there in the film that captured me?

Well, there is youth, of course, and playfulness. There’s literature, many references from Marivaux’s The Life of Marianne novel to Euripides and destiny’s role to Dangerous Liaisons. Follow the color blue in the film… the “dangerous” encounter is coming.

There is the passage from adolescence to womanhood, the defining moments, the questionings, the uncertainties, the embarassment smiles. The moment when a woman her senior seduces her with wit and looks–and her blue-colored hair.

There is teaching–and learning: only when teachers engage in their lessons, that’s why Adèle’s grades swing. She herself mutates from high-school student to kindergarten teacher.

And there is philosophy. Sartre: existence comes before essence, so there’s a responsibility in action (Emma’s words, more or less).

Emma: I was big on Sartre in high school.
Adèle: Really?
Emma: It did me good. Especially in affirming my freedom and my own values. And the rigorousness of his commitments. I agree with it.
Adèle: Sort of like Bob Marley. Almost.

An Allen-esque dialogue, right? But without the cynicism or neurosis, and all the youth and naiveté and passion in beliefs.

The two women’s looks are unique. Emma’s smile is much more savvy than Adèle’s, with some complicity. No such thing as chance! Destiny? Or neither.

There’s protest, too. A happy time after all, in the midst of school.

There’s lot of nude female bodies and lovemaking. The two actresses are just amazing at their lightness and (acted) spontaneity. Says The New Yorker:

When Kechiche films Adèle and Emma making love for the first time, he does so with one of the most jolting cuts in the recent cinema—from the women sitting together on a park bench to the two of them naked together in bed, tangling erotically. The immediate continuity from public to private life[…]

Both actresses underwent serious moments of embarassment when filming such unconventional and long scenes, another reason to applaud their performances.

And there’s the homosexuality, of course. But, as in Call me By Your Name, this is not a story about it. However, Emma came out with her parents, perhaps more sophisticated than Adèle’s, and she and her lover are accepted for what they are, no question asked. Not so on the other side, and some lies are exchanged.

Look at this fantastic scene of bolognese eating at a party, with a B&W movie playing in the background (more on that later).

Now, the movie playing in the back intrigued me and it seemed there was no reference to it on IMDB. Google didn’t answer. But in the final credits I found it. It is Georg W. Pasbst’s Pandora’s Box from 1929. Interesting stuff, apart from the visual effect. I’m always curious of movie citations within other movies, and IMDB and YouTube come to the rescue. Look:

Interpreted by mute-film superstar Louise Brooks, this is the story of a prostitute who “unwittingly inspires evil”. Hmmm… perhaps Kechiche alludes to Emma’s flirting back with her previous fiancee, much to the anxious looks of Adèle?

Blue is a wonderful movie, no doubt. One that lingers beyond a blog post. So, I needed to do a couple more GIF’s.

Professor, web2.0 enthusiast, and didactic chef.
View all posts by Antonio Vantaggiato →
This entry was posted in art, films and tagged cinema, film. Bookmark the permalink.