The Times They Are A-changin’

Posted on October 10, 2011 by Antonio Vantaggiato

Herbie Hancock plays (with Tal Wilkenfeld and Kristina Train) the Dylan tune, The Times They Are A-changing.

Come gather ’round people
Wherever you roam
And admit that the waters
Around you have grown
And accept it that soon
You’ll be drenched to the bone.
If your time to you
Is worth savin’
Then you better start swimmin’
Or you’ll sink like a stone
For the times they are a-changin’.

The ever-current song and its lyrics, together with the Irish sadness they give in their performance make me reflect on our  tough times, and the fact they are a-changing, no doubt. Problem is: which direction: The open, transparent way, like Iceland is teaching us and the #indignados and #occupywallstreet people are demandind or the sad, corrupt & closed way of the Greek government? (see a great article from Manuel Castells on the subject: La solución islandesa.)

I cannot but link these facts:

I can’t really understand why we were so much anti-Microsoft because it monopolized the computing world; yet we passively accept Google’s entrance (and its low-key march) within the walls of academia, without anybody really asking if there ought to be some conflict of interest in having one marketing company hold the full email system of a college.

And we passively accept the golden jail Apple has built, while holding its gates open for us to enter. Now those gates are closing. The Lion OS is astonishingly similar to the iOS, meaning that software is increasingly being downloaded and installed (with greatest ease, one must say, for this is Job’s intelligence) from a Mac App Store, quite the same concept of the famous App Store of iPod, iPhone and iPad. Except, usually it’s the user who has the exclusive power to decide what apps to install, while, as known, in the iOS world Apple filters out all the apps it deems not suited. Well, the Mac OS application market is becoming similar to the devices, and I am really worried that sometime in the next near future only the most geek will be able to hack their way into a Mac and install what they want, while all the others will be able only to do what the mother company dictates. And I harbor no illusion the same story will happen on Windows.

It already happens with the closed system of the iPhone. It makes sense, from Apple’s point of view, to have it closed and well guarded, for this way it can work its best uniform way because there is always only one version, not a plethora of sometimes conflicting third party versions like it’s happening with Android. Still, iPhone users have won an extraordinary legal battle when the Supreme Court declared it is fully legal to jailbreak it and install what one deems fit. Thus, Cydia and independent developers have flourished, and one can really customize and appropriate one’s device through all sorts of free apps. But Apple insists it breaks its warranty!

It is not at all weird then to hear Stallman‘s expressions about Job’s death. It is always unjust and sad when somebody passes away. And Jobs has no doubt incarnated the essence of the Zen innovator-philosopher, more than anybody else. Yes, Jobs inspired me and my generation. Yet, that Zen idea is a bit misused because, as Stallman justly believes, Jobs is also the incarnation of all things closed, secretive, non-transparent. And he made a flag of that. So, he thinks that now that Jobs is no more around, it will be easier to go back to the Open.

But I don’t think so. Andy Crouch wrote on the WSJ that technology makes us forget our human limits:

Steve Jobs turned Eve’s apple, the symbol of fallen humankind, into a religious icon for true believers in technology. But can salvation be downloaded?

Steve Jobs made that happen for us. He understood the computer had to disappear behind some device. Technology is most loved when it’s invisible, indistinguishable, as  Arthur C. Clarke said, from magic.

The biblical story of the Fall pronounced a curse upon human work—”cursed is the ground for thy sake; in sorrow shalt thou eat of it all the days of thy life.” All technology implicitly promises to reverse the curse, easing the burden of creaturely existence.

So, do you see why all the ideas of computers in the classroom have miserably failed? Another myth of technology and education: The followers of  “A computer to every student” think in terms of technology being used for educational purposes, while in order for its being successful, technology must disappear into everyday use. Precisely what Jobs taught, and masterfully imposed upon us. True, we are free to choose its devices, or not to choose them. But that freedom is eroding fast, when more and more devices and computers get more and more similar to iPads. While iPads enter our schools (this time indirectly, for students buy them even though we haven’t figured how to incorporate them into our classrooms), they are getting access to a more controlled version of the Internet, one that passes through Apple’s censorship office. Same happens when they go back home and turn on their Web TV box. It’s not the Web they get access to, but a controlled subset of it.

So, where’s the link with #occupywallstreet? 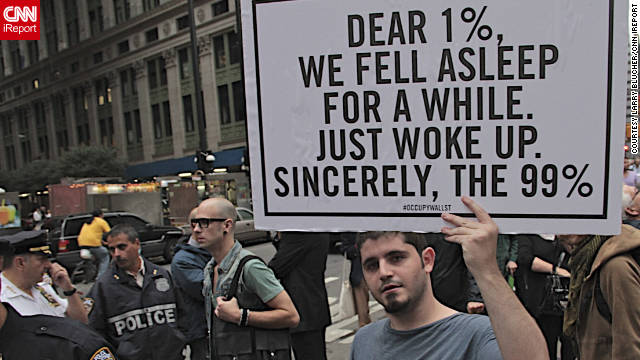 Sometime ago, I read Jim Groom in Understanding #occupywallstreet, who quoted Douglas RushKoff’s article “Think Occupy Wall St. is a phase? You don’t get it“, and that I again quote, for its power:

That’s because, unlike a political campaign designed to get some person in office and then close up shop (as in the election of Obama), this is not a movement with a traditional narrative arc. As the product of the decentralized networked-era culture, it is less about victory than sustainability. It is not about one-pointedness, but inclusion and groping toward consensus. It is not like a book; it is like the Internet.

Remember, I began quoting Dylan: The Times They Are A-changing. And perhaps the revanchist forces of post-industrial capitalism which were so well put offside and disoriented by the Internet and the Web are too late. Perhaps: this is my hope.

Those revanchist forces without a general are reclaiming the terrain lost (publishers allying themselves with Learning Management Platforms like Blackboard, for instance), and they are pushing forward, again, the once-lost battle of content. They say we must protect our content, instead of helping us to share it, like we learned to do thanks to the Internet. They “offer” us facility in getting, storing and accessing that content –and shutting it close in a vault– or should I say in a morgue. Meanwhile those same publishers conquest spaces within Facebook and social networks, by which logic one could end up accessing certain newspapers only within Facebook. Only within Facebook?

Do you see the danger in that Troyan Horse? Ain’t it a Troyan Horse for education and our society? I only have that hope, that the new Internet-like forces of the indignados, the #occupywallstreet resist!

The members of Occupy Wall Street may be as unwieldy, paradoxical, and inconsistent as those of us living in the real world. But that is precisely why their new approach to protest is more applicable, sustainable and actionable than what passes for politics today.