I got mail from el Puente de Puerto Rico

Posted on October 26, 2017 by Antonio Vantaggiato

You got mail, Antonio. I was told this morning, as soon as I arrived at the big hall we’re using as a common space (a “Commons”?) for faculty to work, recharge devices and fill reports after hurricane Maria. 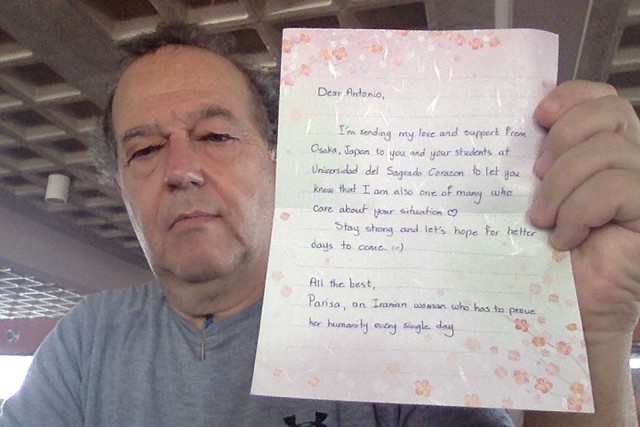 As soon I saw in my hands a big white envelope I knew it had to be Parisa’s letter from Japan. Parisa (@ParisaMehran) is a friend, a networked friend whom I didn’t even know before Alan Levine devised his genius plan called Puente de Puerto Rico (A bridge of Postcards) #care4sagrado, after the name of my university del Sagrado Corazón.

A puente of postcards from the four corners of the world for people to say #wecare. And the first corner just responded. Well, Alan thought his postcard would get here before the others, but little did he know Parisa would be using Express-mail.

Long story short, today I got the very first postcard of the series, and it was hers. Actually, it was a delicious little letter. From Japan, which I’d love to visit, but haven’t yet.

Join a campaign of mailing postcards to @avunque & his Ss to say unlike #Trump #WeCare about #PuertoRico ?? #care4sagrado #inf103 #inf115 pic.twitter.com/KgOUQONDEk

And this is my tweet this morning after i got it. Read the letter.

Wonderful!! First #care4sagrado postcard came in this am from Japan! Thank you, @ParisaMehran. This 4 U #inf103 #inf115 #inf201 @sagradoedu pic.twitter.com/KYHlllvnQb

Double read the last sentence. It resounds in my head non stop since her tweet.

A woman who has to prove her humanity every single day.

This. Note. #care4sagrado from @ParisaMehran "in Japan an Iranian woman who has to prove her humanity every day" To me? Absolute proof. https://t.co/6NlA9XQ7ho

This is powerful. And beautiful. And I’ll ask her to express it over a podcast Alan and I will begin soon, if she likes to join.

Did I say she is Iranian? Well, two coincidences are too many. Iran is in my five-spot bucket list for countries I want to visit, 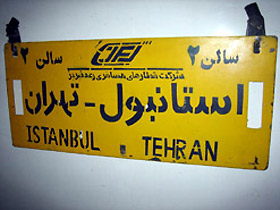 and I have been planning to take the famed train from Istanbul to Tehran for some years, believe it or not.

You made my day, dear Parisa! And that of my students. Thank you. Thank you networks. And thank you Alan for being the trigger to all this.